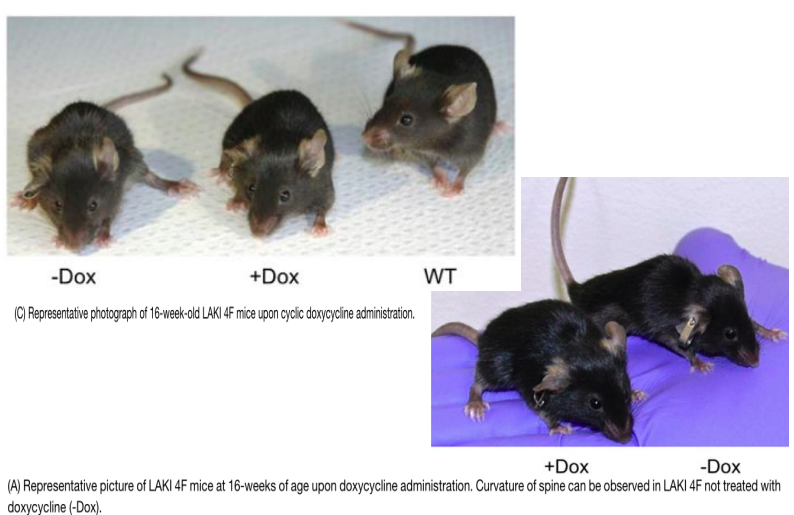 LAKI are fast-growing mice with a mutation in lamin A (LMNA). Long-living mice are given the same experience, but they are now only 12 months old, therefore, with an average lifespan of 3 years and a maximum of 5 years, the results can be expected in 2018-2019.

The experiment was conducted at the Salk Institute in La Jolla, Southern California by Izpisúa Belmonte.

In 2013, Horvaths found 353 epigenetic markers of human aging, according to which the chronological age of a person was determined with an accuracy of 1.5 years. For these stem cells, this age was 0.

For those who are interested, recently a scientist of Harvard and Moscow University Vadim Gladyshev, who received a mega grant, determined the same epigenetic biomarkers of the mouse's biological age – popularly stated in the fight aging blog. This is very important for the accelerated development of new therapies or geroprotectors in mice.

And a little insider for dessert. The company Calico conducts an experiment on 1000 mice in the Stanford Jackson Lab divided into two groups – ordinary long-lived mice and the same mouse but on a starving diet prolonging the life of mice by a record 50% (and only 5% according to the latest data on primates). When the experiment is completed, Google’s spinoff hopes to establish biomarkers of the biological age of the mice that are needed to speed up the development of therapies or geroprotectors.

A little insider from the article New Yorker Silicon Valley Quest for immortality translated into vc.ru – Ned David 49 from Unity Biotechnology, which received an investment of $116 million, mainly to fight cell-related cells last year, already visited Belmonte in December two times and one in March – they plan new experiments (with the budget of the entire Salk Institute only 117 million, so the start up for a radical extension of life here is very handy).

So it turned out that the process of zeroing is not binary (either stem, or not), but quite a gradual. And with small intervals of doses of the Yamanaki cocktail, and only a sip, the epigenetic markers are not reset, but only roll back. The cell does not change its phenotype with the skin cell or heart, and remains (that is, unlike the pluripotent one, does not yet express the Nanog marker – this is for the nerds).

Thus, Belmonte rolled back the epigenetic clock of mice in which in the genome were Yamanaka cassettes that were activated by doxycycline and prolonged the life of mice by 33% and median by 50%.

If laboratory mice were drinking water with doxycycline – but only two days a week – they lived more than thirty percent longer. In wild mice (only 12 months old) subjected to the same therapy, the muscles and pancreas were renewed.

Slides of Yuri Deygin’s speech at the Scientific Environment in the Library named after I. Brothers Grimm. Novovagankovsky Lane 22. 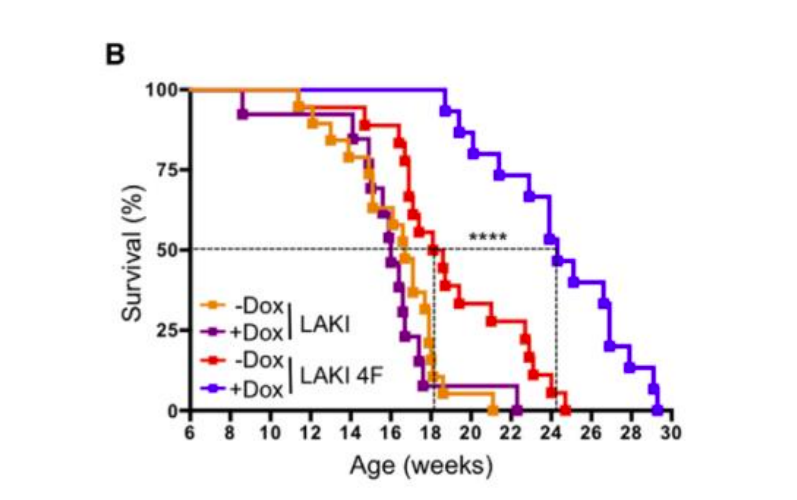 Telomeres were extended (according to the experience of M. Blasko delivered in Barcelona on the same LAKI)

Let me remind you that Belmonte conducted the experiment not in the most optimal way – he derived a transgenic line of mice with Yamanaka OSKM genes, Which included transcription of these genes with the use of doxycycline (antibiotic) twice a week in a row after which they rested for 5 days.

As seen from the graph below, if doxycycline is given not 2 but 3 days, then the mice are already starting to die, given on the 5th day of therapy half are dying: 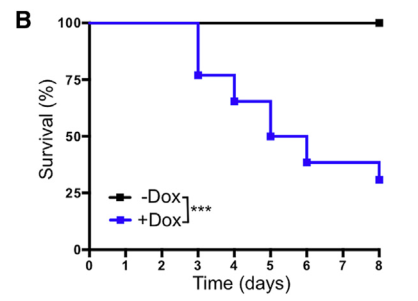 Now it remains to find the optimal proportions and timings for these factors, as well as the delivery method and dosage regimen that can prolong the life of mice much longer.

A simple overview of the discovery of Belmonte in the journal Science.

This experience on the person needs AAB viral carrier with the factors of Yamanaki. As suggested by Yuri Deigin, one can simplify the experience and make the AAB confined exclusively to the hypothalamus (well, or the pineal body) and other modifiers of brain development and aging. It is also promising not to allow the body to carry out an epigenetic shift at all, but the experience that proves such an opportunity is still unknown.

Meanwhile, the Open Longevity patient's site of the Science Foundation for Life Extension was opened. A clinical trial of geroprotectors is coming, while specialists offer a combination of sartans + statins, but the site is indifferent to any therapies, including the intake of such future geroprotectors as magnesium, NAC-N-acetyl-L-cysteine, glycine, ginkgo biloba (GinkGo Leaf)

It is possible to download blood tests for biomarkers of aging by selected specialists.

This data will then indicate your biological age, and there will also be open data with the possibility of cross-comparison and any research on these biomarkers of people from 20 to 70 years old.