The idea of “maloccio” (literally, evil eye or mal-eye) permeates Italian superstition. The hand sign of extending your pinkie and index finger, while keeping the others folded back, is supposed to ward off an evil spirit someone has cast on you. Wearing a tiny horn-shaped charm (the corno) around your neck is another way to eliminate evil curses.

Strangely, the evil spirit can be summoned by something as simple as a compliment. If someone tells you your baby is beautiful, the fates have been tempted. You must make the “horn” sign to protect your child. 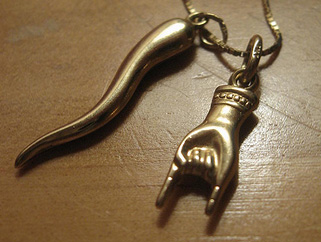 The Number 17 - The Pythagoreans believed that the number 17 was a disgrace in itself, as it lies between 16 and 18 which were considered to be perfect numbers.

Crossing a black cat - In medieval times, the black cat fell out of favour following its glorified image in Ancient Egypt to become a symbol of witchcraft and the Devil.

See: An Encyclopedia of Claims, Frauds, and Hoaxes of the Occult and Supernatural by James Randi and The Skeptic's Dictionary by Robert Todd Carroll